One of the darkest secrets behind the production of meat and dairy is the huge amount of animals who are being slaughtered while pregnant. The industry manages to hide this reality well, but it's time to unveil the hideous truth.

Studies from different countries have found what can only be described as sickening. The numbers show that many of the females who are sent to slaughter, are also carrying a baby! These mothers-to-be are arriving from both meat and dairy farms, and it's happening all around the world.

Given how common this loathsome practice has become, it's safe to say that by consuming meat or dairy, one is also directly supporting the slaughter of pregnant mothers.

According to Studies: Many females sent to slaughter are pregnant

In Denmark, a study from 2019 has found that 23% of the female cows who were sent to one of the country’s biggest slaughterhouses were pregnant![3]

In the UK, a staggering 23.5% of the female cows who were sent to a slaughterhouse in South West England were found to be pregnant.[4]

In Belgium, a study from 2006 found that on average, 10.1% of female cows were carrying babies while slaughtered.[5]

A 2011 study of 53 different abattoirs in Germany found that on average, 9.6% of slaughtered female cows were pregnant. Moreover, around 90% of them were slaughtered during the last two trimesters of pregnancy![4] A newer study published in 2016 concluded that "the slaughter of pregnant cattle is a common and widespread practice in German abattoirs.".[6]

In Australia, two different sources mention that the ratio of pregnant dairy cows is very high. According to Josh Agland, an ex-worker of an abattoir in NSW Australia, at least 50% of the dairy cows who arrived at the slaughterhouse were pregnant. In addition, an article that was published in 2008 in the Australian Brahman Breeders’ Association stated that "abattoir surveys in Queensland indicate that approximately 60% of cows are pregnant when slaughtered.".

Looking back 25 years, it seems that researchers from the United States didn't examine the percentage of pregnant animals who are slaughtered, perhaps due to lack of funding by the meat and dairy industry for this type of research. A study from 1993 which examined 23 different meat farms in southwest Kansas found that "the incidence of pregnancy varied from 0 to 25% with an overall mean of 4.74%".[7]

Pregnant females arrive from both meat farms and dairy farms.[3] Among the common reasons for sending pregnant mothers to slaughter is infertility (meaning the farmers think the animals are infertile when they are actually pregnant)[4][8], mastitis (an udder infection, common among dairy cows)[4], poor health[3], and high demand of meat.[9]

A mother cow looking at her newly born baby who was born while she was being transported to slaughter. She was killed later that day. The calf was left on the side of the road and was reported to have been rescued.

Can we even begin to imagine what it must feel like for a pregnant female who is flooded with all sorts of hormones such as cortisol (associated with stress) and oxytocin[10] (known as the "love hormone”), to go through the terrifying experience of being violently rooted from their only known surrounding and transported to a slaughterhouse?

In the case of one pregnant cow, the transport alone was so stressful that she jumped out of the moving vehicle and into the highway. Luckily for this cow, who was later named Brianna, a local sanctuary came to her rescue and she was able to give birth a few days later in safety.

But the vast majority of these pregnant mothers don’t get a happy ending. Some are so stressed, they go into early labor on the transportation trucks or inside slaughterhouses, where they’re surrounded by the stench of blood and the screams of other terrified animals. 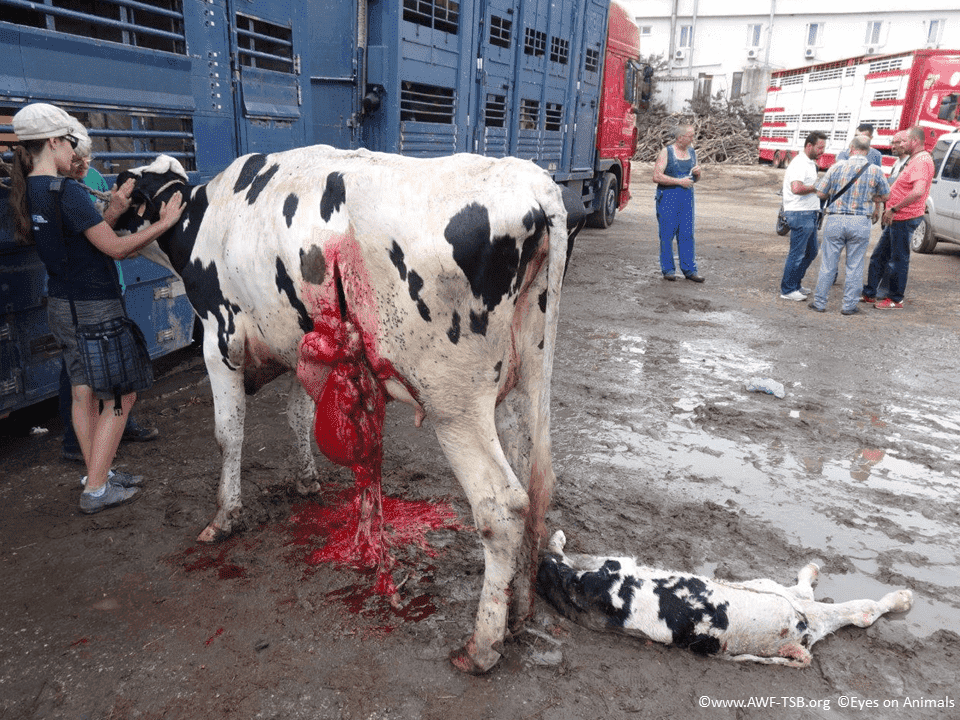 Concerned people comfort a dairy cow from Germany who was sold to a slaughterhouse in Turkey. In the middle of the days-long transport, she went into labor and had her stomach cut open in the middle of the street with no pain killers. Her baby was born dead and she was killed soon after. (Photo: Animal Welfare Foundation / Eyes on Animals)

Cited studies on the subject suggest that there isn't enough research on the physical[9] and psychological[11] state of pregnant animals who are slaughtered. But is this really needed? Isn’t it obvious that being pregnant adds another layer of physical pain and emotional stress, to the already terrorizing experience of being slaughtered?

If we also factor in other variables, such as the fact that many of the pregnant mothers who are being sent to slaughter are also suffering from health problems [3], things become even more tragic. As if being slaughtered while carrying a new life inside you, a life you're so eager to protect and love, was not the very definition of torture already.

Dairy cows who collapse are sent to slaughter. Many of whom are also pregnant. (Photo: Farm Sanctuary)

In order to make this world a kinder place for mothers and babies, please give vegan food a try. For an easy start, join Challenge 22 to get free guidance and support for 22 days.
Share:

Kinder World is a non-profit initiative dedicated to encouraging compassion for animals. You can reach us at kinderworld.org@gmail.com.

View all posts by Kinder World →