Heartbreaking footage obtained by Animal Recovery Mission (ARM) reveals the devastating reality behind the largest organic dairy in United States. What is being done to the cows who are trapped inside Natural Prairie Dairy, a family-owned and certified organic farm from Texas, is devastating.

No mercy for cows

Arm’s investigator saw workers chase cows when they give birth, so they can take away their babies. The miserable cows who have already experienced the devastating results of having their babies near workers, try desperately to give birth in a safer location, but they never succeed.

Cows who collapsed from exhaustion were kicked when they were down, only to be taken to slaughter soon after. Additional day-to-day violence was inflicted on all cows and calves and included the use of tools such as screwdrivers, for additional pain.

Despite the misleading marketing, none of the cows was allowed to graze in the pasture during the 4-months-investigation. Further investigation by ARM revealed that the cows are kept almost entirely inside the crowded holding areas, which are filled with feces, urine and flies.

“It’s a great place to be a cow.” Source: Natural Prairie Dairy’s website.

Natural Prairie Dairy, the largest organic dairy in the U.S., holds 25,000 cows in 4 locations in Texas, and is set to expand to Indiana as well. It currently supplies Kroger, Target, Costco, and Publix through the bottling plant of Aurora Organic Dairy. The farm owner is also the vice chairman of Select Milk Producers, a large group of dairy producers that present themselves as “family farms” with higher standards.

“We are asking all consumers to use their purchasing power to protect these animals. Choosing organic is not a solution - moving to plant-based alternatives is the only way to stop the cruelty and abuse.”

In order to make this world a kinder place for mothers and babies, please give vegan food a try. For an easy start, join Challenge 22 to get free guidance and support for 22 days.
About Animal Recovery Mission (ARM) Expand

Founded by Richard Couto in 2010, the Florida-based organization aims to expose the horros done to animals and to reduce their suffering and pain. 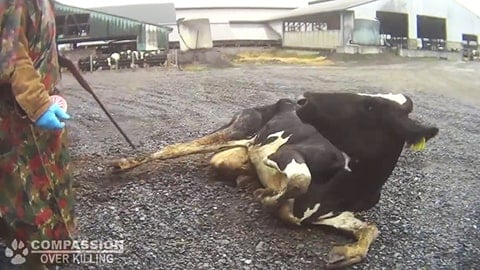