The chick culling machine you see in this video grinds turkey chicks while they are alive. The footage was captured by L214 inside a turkey hatchery in Bretagne, France. The hatchery breeds turkey chicks and sells them to Turkey farms.

The chicks who are shredded alive were either born too small or are otherwise not according to meat industry standards. The turkey chicks in this video were executed soon after they were born.

In order to blur the horrors behind this vicious practice, the meat industry refers to this as "chick culling". More accurate terms such as "chick shredding", "chick crushing" or "chick grinding", are avoided, and images of what this looks like are never revealed to the public. Thanks to L214, the public now has a rare opportunity to see what is actually happening to these miserable chicks. Not just in France, but all over the world.

In order to help more animals escape a fate of misery, please give vegan food a try. For an easy start, join Challenge 22 to get free guidance and support for 22 days.
About L214 Ethique et Animaux Expand

L214 Ethique et Animaux is a French non-profit organization that is focused on exposing the horrors done to animals in the production of meat, dairy and eggs.

L214 aims to reveal the daily routine inside factory farms and inspire the public to make more compassionate food choices. 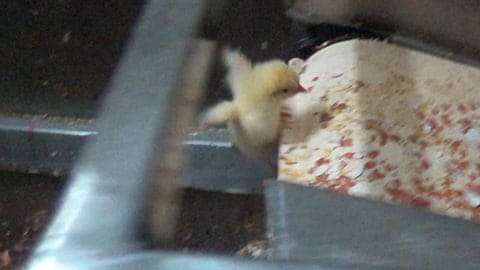 All Male Baby Chicks Are Ground Up Alive

Male baby chicks cannot lay eggs, so what happens to them? This following video will leave you speechless!

A shocking video that captures the horrors that baby chicks endure during their first day of life - THROUGH THEIR EYES.

Chicken Hatchery – Find Out Why Baby Chicks Are Killed

Watch the findings of a thorough investigation into hatcheries that breed chicks for both eggs and meat.

Why pay an industry that treats day old chicks so cruel?

This is where turkey chicks come from before they end up on meat farms.

'Debeaking' (also known as 'beak trimming') is a standard practice in the egg industry. This shocking video shows what it's like to be the victim of this vile act.

Since male chicks can't lay eggs, they are disposed of in the most violent ways. This video shows a common method for killing chicks in India.

When baby turkeys are born too small for the meat industry, a machine like this one crushes them alive.

He used to work for the Egg Industry, but then he became vegan. This ex-egg farmer's confession left everyone speechless.