This new devastating video of pigs being burned alive was filmed in Fujian, China‏, on November 2018.

China has the largest pig meat industry in the world, killing over 440 million pigs every year for their flesh. Similarly to all other countries, these pigs are forced to live in crowded and filthy factory farms where diseases spread like wildfire despite the vast use of antibiotics.

In this instance, the pigs got infected with the  African swine fever virus (ASFV). As a result, the poor pigs were thrown alive into a mass-grave, one on top of the other. Then, some of them were set on fire, which started to spread.  In the video we can hear the screams of the burning pigs, in addition to the screams of the other terrified pigs who are realizing they can't escape the flames.

How each one of us can help to reduce animal suffering

As the human population increases, the demand for animal flesh is expected to rise, which means that pig farms will become even more crowded and vulnerable to diseases. As always, the animals will be the ones who pay and they will do that with blood, terror and screams. The good news are that each and every one of us can actively reduce the number of animals who suffer for meat by making simple changes in what we eat. 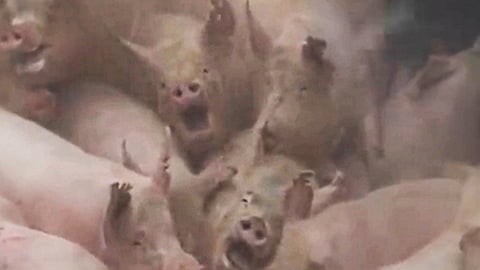