Pigs Buried Alive in South Korea: The Killing of Pigs Due to Virus (Video)

This horrible video of pigs being buried alive was captured in South Korea by Care, a local animal rights group.

The video shows a common way to get rid of infected animals. In this case, helpless pigs were buried alive in a mass grave. The terrified pigs screamed desperately as they were violently thrown on top of each other. Their screams pierce the heart and wound the soul. But will we listen?

Why pigs are buried alive?

Burying pigs alive is standard practice for killing pigs whenever governments fear a virus infection would affect humans as well. This is one of the cheapest ways of getting rid of many animals at once.

Since animal farms are crowded and filthy, viruses spread quickly. In this specific case, some of the pigs were tested positive for the Foot-and-mouth disease virus (FMD), so the entire population was sentenced to death.

How many viruses will it take before humanity rethinks its lust for animal flesh? How many more victims, animals, and humans alike, will it take before we see the meat industry for what it truly is. A vile and dangerous industry, based on the enslavement and torture of innocent animals who have done nothing to deserve it.

In order to help more animals escape a fate of misery, please give vegan food a try. For an easy start, join Challenge 22 to get free guidance and support for 22 days.
About CARE Expand

CARE (Coexistence of Animal Rights on Earth) is a
South Korean animal rights organization with offices both in the United States and South Korea. 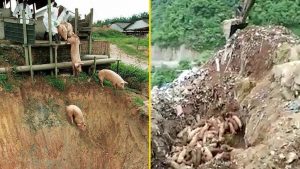