Downer Cows in Denmark: How the Dairy Industry Treats Mothers

This poor cow, who was given the number 416, was filmed by activist Casper Hilt in a slaughterhouse in Aarhus, Denmark. This important footage sheds light on the Danish dairy industry, which operates similarly to other dairy farms around the world.

Why are they dragging this cow?

The helpless cow in the video is what the industry calls a "downer cow”, which means a cow that can't stand on her legs. Sadly, downer cows are a common sight on dairy farms all around the world, as a result of non-stop pregnancies and milking.

This phenomena of “downer cows” is particularly disturbing, given that dairy farms only keep very young cows. On average, cows on dairy farms are slaughtered at the young age of 5, despite having a lifespan of 20-25 years. Despite their young age, many dairy cows reach a point where they are so exhausted they can't even stand.

In order to profit from them one last time, dairy farms send the cows who can't walk to slaughter and sadly, the cow in this video was no exception. Cows that can't walk are lifted by a forklift and thrown into the transport vehicles. They are transported along cows who can still walk, which means that they are stepped on by the other cows, whenever the truck stops of turns.

What is being done to the cow in the video?

According to Casper Hilt, every day, the workers finish their shift by killing the cows that remained in the truck because they couldn't walk to the kill floor. The poor cow in the video was shot with a bolt gun inside the truck in order to make her unconscious. However, a veterinarian that examined the footage determined the cow was still conscious in later stages, which means the shot was not accurate, as is sadly the case with many slaughtered animals.

In order to take the conscious cow out of the truck, the workers used a forklift that dragged her across the asphalt. Then, they slit her throat wide open and continued to aggressively move her with the forklift in order to get a good grip of her body. The fully aware cow was then taken into the slaughterhouse, where they continued to cut her limbs - most likely while she was still alive and aware.

Was this reported to the police?

Although this case was reported and video evidence was submitted, the police didn't consider this to be a violation of the Danish Animal Welfare law. In their words: "Just because something is not good for the animals, doesn't mean it's also illegal."

What can I do to help? 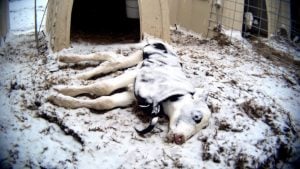