A new investigation exposes how workers beat and abuse baby male calves during their transportation from Ireland to different parts of Europe.

The shocking footage was released by L214 and Eyes on Animals to show how workers beat and abuse male calves in a transit center near Cherbourg, France.

As can be seen, the workers have no patience for the babies who were taken from their mothers and are overwhelmed from the journey.

Why are male calves transported to other countries

Cows, like all female mammals, can only produce milk after giving birth. To prevent the newborn babies from nursing, dairy farms separate the babies from their mothers soon after birth.

While female babies can replace their mother and be exploited for their future milk - male babies are considered "waste products". Some farms prefer to brutally kill these babies on the farm itself, while other farms, like the ones these babies came from, prefer to sell the babies who are then slaughtered for "veal".

How can we help male calves?

L214 Ethique et Animaux is a French non-profit organization that is focused on exposing the horrors done to animals in the production of meat, dairy and eggs.

L214 aims to reveal the daily routine inside factory farms and inspire the public to make more compassionate food choices.

About Eyes on Animals Expand

Eyes on Animals is a European non-profit organization dedicated to help farmed animals by exposing the various cruelties they suffer. The headquarters of the organization are in the Netherlands. 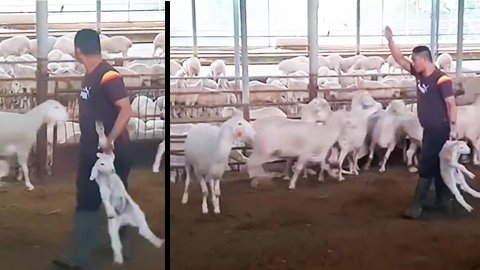